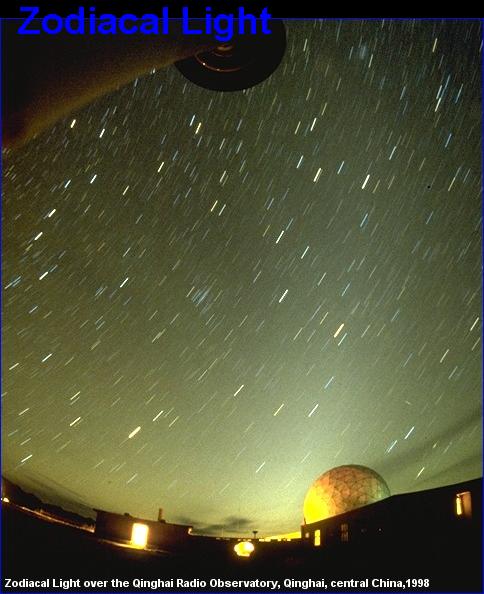 Zodiacal light over the PMO Qinghai Radio Observatory near Delingha, Northwest Qinghai, central China, 19 November 1998. The observatory lies at 3200 m altitude in the desert. The morning light is visible as the pyramidical light cone at an angle over the observatory dome. Note the small meteor right of the dome (photograph © 1998 by M. Langbroek)

From a dark secluded location, this disc of dust is visible from earth at night. A very faint band of light stretches over the sky following the path of the ecliptic ("zodiak"). This is the Zodiacal Light. Just after the end of evening twilight or just before the start of morning twilight, the main light (morning light and evening light) is best visible as as faint pyramid of light spread out over a very large area of the sky. Near its base at the horizon it measures some 40 degrees, and it stretches for 60-80 degrees under good conditions, as a ghostly glow. The brightest parts are as bright as the brightest parts of the Milky Way, but the nearness to the horizon with its atmospheric extinction effects (and sometimes increasing light pollution) makes it much more harder to observe than the Milky Way. It is best seen from the tropics, where usually it is not too much of a difficulty to see it due to the favourable steep angle of the ecliptic with the horizon. From higher latitudes (above 40 degrees) it is more difficult, owing to a less steep angle of the ecliptic for most part of the year. From these latitudes, the best times of the year are March-April in the evening, and October-November in the morning. A very dark observing location with a dark horizon lacking light pollution, and a moonless night are absolutely necessary.

More difficult to see is the Gegenschein, or opposition light. Right opposite on the ecliptic to where the sun is located, a faint elliptical glow with a diameter of about 15 to 20 degrees is visible. It is best visible at local midnight when it reaches its highest point in the sky. In December, it is lost in the bright Milky Way, so the best time to search for it is in November (in the northern hemisphere at least; from the southern hemisphere, it is May). Around 15-20 November, it is located between the Pleiades and Hyades, these two clusters providing a nice celestial landmark to the phenomenon.

An even more difficult faint glow connects the tops of the morning and evening light to the Gegenschein: the light bridge. This is the most difficult to observe of all Zodiacal Light phenomenon.